How to Create a Fitness Plan That Works like Magic

Are you a planner? Or do you like to fly by the seat of your pants, letting life unfold spontaneously?

My natural inclination is to let things unfold – and many times, listening to my gut has put me in the right place at the right time. If you’re like me, you probably can think of several incredible opportunities in your life that seemed to magically appear – as if they were “meant to be.”

But when it’s been time to actually make that magic happen – to meet the challenge of those opportunities head-on – I’m most successful when I buckle down and follow a specific plan.

For instance, when I decided to compete in figure shows, I followed a step-by-step plan for my workouts and my diet.

When I landed a book deal I was completely unprepared for (long story, but definitely part of letting things unfold), I had to create a detailed plan to get it written … in a month … while still managing to train some clients.

And one more: when I suddenly found myself out on my ass from a business partnership, and an unexpected new opportunity for my own business unfolded in front of me, I had to figure out how to make it work, and that required a plan.

Make the Plan, Work the Plan

This morning, after spending a sleepless night fretting about some long-term stressors, I wrote a step-by-step plan to finally eliminate them.

It’s a pretty awesome plan, if I do say so myself.

But here’s the truth. I’m not sure it’s much different than some of the other awesome plans I’ve got tucked away in notebooks on the bookshelf next to my desk.

Here’s the thing about plans:

That’s right: it all comes down to action. Checking the to-dos off your plan is the only way that plan is actually going to ever work.

Otherwise, nothing is going to change. And also, if you keep changing your plan before it has a chance to get traction, you’re going to stay stuck.

How do I know this?

Because of those unfollowed plans tucked away in my notebooks.

Why didn’t I follow those plans? Who the heck knows.

Maybe they seemed overwhelming or like too much work. Maybe they interrupted the status quo. Maybe I didn’t “want” the outcome badly enough. Maybe I wanted to take a nap or eat a cookie.

Or if you believe in predestination, etc., it wasn’t “my time” to follow them.

It’s not that complicated. In fact, it’s very simple – there’s no magic involved.

You commit to the plan. You decide to follow it even if you don’t feel like it all the time.

You continue doing that, even if you don’t feel like it on some days.

I’ve coached people for bodybuilding shows and through successful weight-loss journeys. I’ve had numerous friends train for and complete marathons and MMA fights. I’ve worked with young athletes driven to succeed in their particular sport.

None of that stuff just “happens.”

Nearly every single time, all of those achievements have come about when those people put in the work, even when they would have rather been doing something else.

They’ve been alone in the gym grinding through a workout. They’ve stayed up at night, tapping away at their computer keyboards. They’ve run miles before we’ve woken up, and they’ve made phone calls while others waited for people to just show up.

They tune out the naysayers, and focus on the finish line.

And at preset intervals, they assess their progress toward that finish line and, if necessary, make minor changes in their plans to help get them there faster.

That Thing About ‘Adulting’

One of the biggest challenges as an adult is that you often don’t have someone standing over you, making sure you do all the things you need to in order to be successful.

Chances are, no one stands over you in the morning to make sure you get up early enough to complete your morning routine. No one’s cooking you three square meals a day. At work you might have a supervisor who oversees your daily activities, but anything extra? That’s all on you.

In the past, I’ve used coaches to help me. Sometimes having a coach has worked for me, and other times I skipped out on them (and, yes, on myself, too). And I’ve worked with clients who no-showed on me, too, when they were struggling with following their plans.

So, basically, there are two choices. You do, or you do not do.

And once you decide to do, actually do what it takes to get it done.

The results? They’re kind of magical.

Get this FREE Two-Day, Bloat-Busting Detox 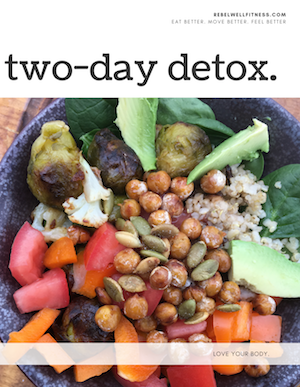 Try this FREE two-day "detox" that will help you feel lighter, leaner, and more energized. Enjoy real foods while nourishing your body with the nutrients it needs!

Success! Now check your email to confirm, so you can download your copy of the 2-Day Detox.

We use cookies to ensure that we give you the best experience on our website. If you continue to use this site we will assume that you are happy with it.Ok