Do you get weather notifications on your phone? I’m not sure whether I love them or hate them.

Because when you live in a state like Maine, where we get a lot of weather, there can be a lot of notifications – especially during the winter.

Anyway, the other day my phone buzzed to warn me about a storm that was gonna hit the next day.

And the first thought that came to my mind was: “Good! I have an excuse to stay home and fire up the slow cooker and make something delicious.”

I decided to try something I’ve never made before, at least in a “healthy” way … chicken and dumplings.

Because to me, it’s kind of the perfect snow-day food: It’s hearty, warm, comforting, and it makes the house smell amazing when it’s cooking.

Chicken and dumplings was a Sunday staple during winters when I was growing up.

Most of my memories with this dish involve coming into a nice warm house at dusk, after goofing around outside in the snow. When I was a kid, maybe we’d been (shhhh, don’t tell anyone) making snow forts and snow tunnels, or playing king (or queen) of the hill. Or, when I was a grown-up kid, it was after tromping through the woods with the dogs.

Either way, when I burst back into the house, I was cold, happy, tired – and hungry. The smell of the chicken stew cooking was  … well …  “homey.” And then cutting the ladle through the dumplings on top, to dish it out into a bowl … well, that’s comfort food right there.

My first impulse was to make this a gluten-free dish, but I decided not to because … well, because I didn’t want to. How about that? But next time I make it – and I definitely will, because it’s super easy to throw together – I’m definitely going to go the gluten-free route with the dumplings to see how they turn out.

Now, you can certainly add more or less of the veggie ingredients if you want – chopped green beans would be delicious. Or you could add in some cubed potatoes. I used what was on-hand.

Because this recipe uses whole foods and not a can of some weird variety of creamed soup, you might want to stir in a thickening agent near the end of the cook time, just before you add the dumplings to the slow cooker.

If you want to thicken it up, take a quarter-cup of broth out of the slow cooker and mix in a couple tablespoons of cornstarch, agar-agar, or whatever you normally use to thicken recipes. Then, stir the mixture back into the stew before dropping the dumpling batter on top.

No worries: the dumplings might look a little “gloopy” before/during/after cooking, because most of the cooking happens underneath. They’ll still taste great!

Give this a try and let me know what you think! It stores well for 3 days in the fridge, making it perfect for leftovers (my favorite).

Want some of my most crave-worthy snack and dessert recipes? I’ve put some of my faves – like mug cake, “fool yourself” cookies, and a decadent granola – into a free downloadable Healthy Treats e-book. You can get it by filling out the form below!

Feed Your Cravings with these Healthy Snack Recipes! 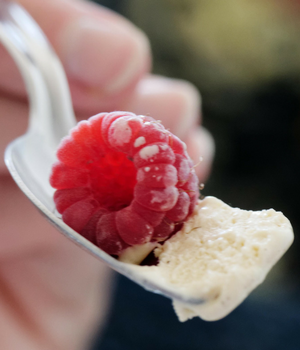 (above: ricotta with honey and raspberries)

Success! Now check your email to confirm your subscription.

We use cookies to ensure that we give you the best experience on our website. If you continue to use this site we will assume that you are happy with it.Ok